What is a Dendron?

A Dendron is many things.

How is Dendron different from X note taking tool?

All note taking tools (try to) make it easy to get notes in. It's getting it back out again that's hard, and it becomes harder as you get more notes.

Whether you are using notebooks tags, or backlinks, once you have more than a few hundred notes, you'll need to have some sort of structure in place (eg. naming convention, hierarchy, etc.) to keep track of them.

Dendron is a highly opinionated note taking tool that focuses on hierarchal note taking. It provides the freedom of Roam's every note exists everywhere philosophy, while layering on top flexible hierarchies to keep track of it all.

While Dendron works with knowledge bases of any size, it really shines once you've accumulated a few hundred notes. I created it to handle my personal knowledge base of 20k+ markdown notes — Dendron lets me track and find any specific note in it in seconds. You can read more about Dendron's hierarchal approach to note taking here.

How is Dendron different from Roam?

Whereas Roam is built around the idea of bi-directional links (and daily journals) which help you create notes without having to explicitly organize your notes, Dendron is built to help you organize notes without friction using flexible hierarchies.

We provide the tooling to create, enforce, and change these hierarchies at will. If you think of Roam as a graph database for notes, you can think of Dendron as Redis. To give you a sense of scale, Dendron is used to manage knowledge bases of +30K notes.

How does Dendron help me track my notes?

Dendron's secret sauce is that it provides the necessary tooling for you to work with hierarichal notes. While hierarchies have traditionally (and justifiably) gotten a bad, I would argue that this is because the tooling around hierarchies were bad, not because hierarchies themselves are bad.

Hierarchies are one of the most effective ways that both humans and computers process large amount of information (there's a reason why almost every database is built from a variation of the b-tree). You can find further details about hierarchies in this blog post

Is Dendron free? Will it stay free?

Dendron, the client, is free and will always remain free. It is also open source so anyone is free to make their own fork of Dendron.

That being said, I'm all in on Dendron and this is my full time gig. I want to make sure that developing Dendron remains sustainable. To that end, I plan on introducing value add server side functionality that folks may pay for. Examples of paid for features include:

Paid for features will be 100% optional and will not be necessary for any client side functionality in Dendron.

Why is Dendron built on top of VSCode?

As with all things, its a matter of tradeoffs. Dendron started its life as a standalone app (eg. think Obsidian) but I quickly realized I was spending most of my time building undifferentiated editor scaffolding instead of focusing on the hierarchies and schemas that made Dendron unique.

I wanted to spend more time building out features that supported Dendron's hiearchy first approach to note taking which is what led me to re-write it for VSCode.

That being said, the core dendron engine is not vscode specific and there are folks that are experimenting with porting it over to other editors (eg. sublime, vim). We also have plans for a standalone editor in the future (most likely, this will be a fork of VSCode optimized for note taking)

Markdown lets you write text in a simple human readable notation that is platform independent. You don't need to have microsoft word to read a markdown file and now a days, all new note taking tools support importing and displaying markdown.

For more context, you can see the original markdown declaration here

Can I use Dendron with existing notes?

You can use Dendron with existing repositories of markdown notes.

Open the Command Bar in vscode and use the Dendron: Change Workspace command. It will ask you for a folder path as input.

Dendron will create a dendron.code-workspace file in specified directory and then open the workspace (if a workspace file already exists, it will use that). It will also create a root.md file in that directory if it doesn't exist (currently this is part of the internal working of dendron).

Dendron does not delete or overwrite any files during the Change Workspace operation.

How do I save?

Dendron automatically saves when you change focus (switch tabs or applications). You can also manually save using Cmd+S or Ctrl+S depending on your operating system

How do I go back to the previous note?

There are 3 ways to go back to my previous note:

How should I name a note?

There are no rigid requirements on note naming in Dendron, other than the dots in the file name are used to construct the note note hierarchy. However, the recommended way is to use all lowercase letters, replace spaces with --mark and remove any special characters. Thus e.g. John's amazing garage becomes johns-amazing-garage.

Also, remember that you will use the note lookup-feature to find notes quickly, and the lookup will use the names of the files. Thus try to name the files using the words that you are likely to use to find the note.

What kind of note hierarchy should I create?

A good guideline is to start with a relatively flat hierarchy (even just a single note in the root!) and add topics as headings into those notes. When notes grow to the point that you have to start scrolling, it’s time to consider if it would be beneficial to split those notes. At that point, you probably already have some idea how the thoughts are placed in your mind - try to mimic that also with the hierarchy.

If you have a hard time deciding which ideas belong closer to root, think which of those ideas are more fundamental in your thinking. As an example, a note related to coding in Excel, should it be named as code.excel or excel.code? This could be resolved by thinking if you will write more about coding where Excel is just one example, or more about Excel, where coding is only one example. In case you think that both excel.code and code.excel are equal and both should be created, you could also make one of them a “master note” and refer to it from the other note.

Do I have to use hierarchies? What if I want to use another approach?

You can, and are encouraged to, combine these other workflows with Dendron hierarchies in order to create your own workflow that takes the best parts of each system!

What if I have a note that belongs in multiple hierarchies?

This comes up a lot especially when your dealing with organizing collections of things, like music or books. There are a few approaches we recommend here.

Hierarchies add too much friction

The hierarchy adds friction but the idea is that the friction (eg. hierarchy) is not a bug but the reason why dendron works with thousands of notes.

The analogy to think about is excel: while putting your numbers inside the structure of a spreadsheet might not be the most straightforward way of getting to a numerical solution, its use becomes indispensable once you deal with a significant amount ofnumbers.

The way to think about dendron is that its not like google where you type a question and try to find an answer - until we get true AI, this simply doesn't work for personal knowledge. Rather, Dendron helps you organize your notes so you can reference the information you need to answer your own questions.

What is the deal with schemas? Do I need to use them?

The short answer is no, you don't need to use schemas. That being said, schemas can help you manage your notes, especially as you collect more of them.

If you're familiar with typescript - Dendron schemas are similar to the types offered by typescript. You can compile your typescript code into javascript even if the types don't match (subject to your tsconfig). Types help make your projects maintainable, especially as they grow.

Currently, Dendron will do is show you an indicator if your schema doesn't match. In the future, we'll have a strict mode where we will actually prevent you from creating notes that don't match your schema.

But even if you don't have a lot of notes, schemas are helpful because they provide extra features like templating and auto complete.

Can I do filter by the metadata in Dendron?

Metadata is currently under utilized because we don't have a built in way of easily querying by it. We currently have this issue tracking the progress of advanced query work.

In the future, we want to support:

We also want to support some subset of the queries as note references so that the results can be included in page.

Can I autocomplete an hierarchy?

How to launch dendron with most recent vault quickly?

In menu bar of VSCode, select File -> New Window and click the Dendron workspace in Recent section of the Welcome tab.

Why are there root files in my notes?

When you initialize a vault, root.md and root.schema.yml get created inside each vault.

They serve as the "roots" of your vault for your notes and schema respectively.

root.md is what shows up when you do a lookup with an empty line ""

root.schema.yml is a schema that is global for all hierarchies (normally, a schema is scoped to a particular hierarchy)

Now this isn't required per-say, we could just do away with root notes and stick strictly to hierarchies and this might be an option in the future but this is the reasoning at the current time

ps. root.schema.yml doesn't work right now as described in the sense that we haven't implemented global schemas yet

Can I use a dark theme for the markdown preview?

Yes. There's a setting called markdown-preview-enhanced.previewTheme that you can set which has a list of default themes, including dark themes.

Can I customize the markdown preview CSS?

Yes. Read this for more information.

Is there a list of keyboard shortcuts I can see?

Dendron has a list of keyboard shortcuts that you can access using Dendron: Show Help command. Note that these only show the commands that come with the Dendron Plugin but not its bundled extensions. We currently have an open issue to list all shortcuts on one page.

Why are there '+' signs next to the notes in the Tree View? 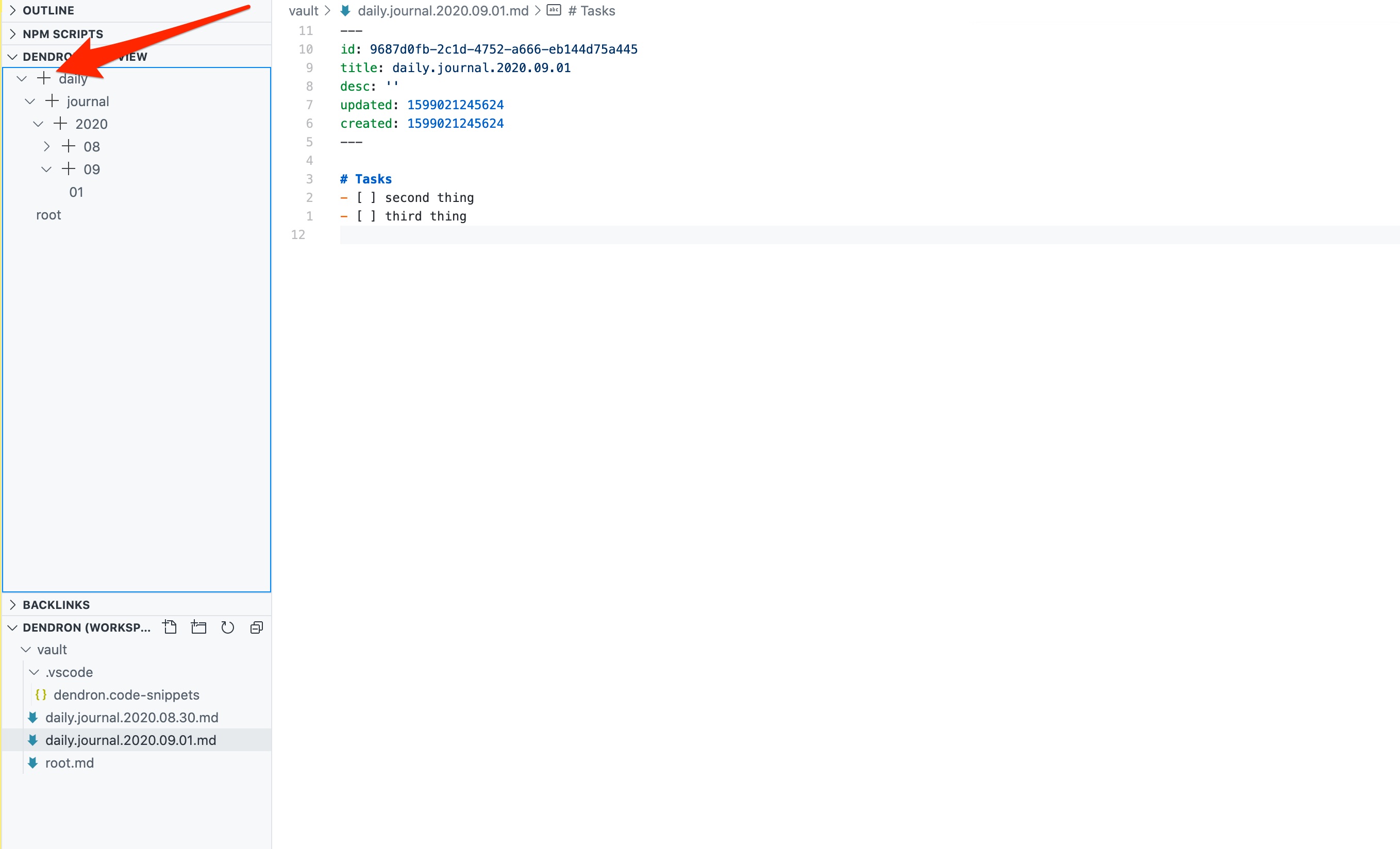 The reason you see this is because Dendron will create stub notes when creating notes that have parents that don't exist. These notes are placeholders and will only be visible in the Dendron Tree View with a + sign next to the name. The reason we do stubs is because we don't want to litter your file system with empty files. Stubs are a compromise - they let you see the hierarchy of your newly created notes without forcing you to create intermediary files.

Why custom markdown preview instead of the VSC one?

Our custom markdown preview gives us much more functionality then the vscode one -> eg. note references, checkboxes, etc.

In addition, the markdown preview that Dendron uses is platform agnostic (eg. it's also available on atom). This means that other editors could potentially adopt it as well.

VSCode Snippets are not working in Frontmatter

The default snippets are scoped to markdown. You can create global snippets file to have snippets that work across all languages.

This is a known issue whenever we release a new version of the preview (mostly because its uncompressed javascript). Moving forward, we'll be removing the dependency on an external plugin and integrating Dendron's markdown features into vscode's native markdown preview in the near future.