This lets you execute commands inside VS Code

To manually install a custom version of Dendron, first obtain the Dendron vsix file (most likely, Kevin will send you a dropbox link 😅). Afterwards, you can install it by the extended options in the extensions pane.

You can diagnose most problems by checking the logs. You can view the logs using the Open Logs Command

Dendron has two sets of logs - client and server. The client logs you can access using the Open Logs Command. You can access the server logs by following the tutorial here.

Dendron has logs for the current session and the previous session.

Dendron does not have a dedicated mobile client at this time. There are numerous mobile Markdown editors that can be used to view and edit Dendron notes. Some popular options are listed below, based on feedback in the Dendron community:

Most mobile apps do not have git support. Here are some third-party guides that have been written up to assist:

If using GitHub with SSH keys or access tokens, here is an alternative: SSH keys that have project/repo-limited permissions as Deploy Keys on GitHub (with Allow write access enabled). This prevents users from setting up SSH keys with user-wide permissions across GitHub, making it more secure and limited.

Adding a Remote Vault to your Dendron Workspace

If you haven't already done so, install Dendron and initialize a workspace by following the instructions here.

Use the Vault Add command via the command palette, select remote vault, and paste the git url of the vault that you like to add

Converting a local vault to a remote vault

From Vaults
Go to text →

When someone pulls down a workspace with a dendron.yml that contains a remote vault, Dendron will automatically initialize the vault at the given fsPath. If the vault is a Workspace Vault (Private), Dendron will pull down the workspace to {workspaceName}/fsPath.

Create note in a specific vault

We currently haven't implemented a command to do but you can use the current manual steps to implement.

You can create private vaults that won't be published or initialized when others clone the workspace. To do this, run Vault Add and add your private vault as a local vault. After it's been added, run Configure (yaml) and set the visibility of the vault to "private" in dendron.yml.

How do I exclude certain vaults from being published?

Export your notes as a PDF

Our current guidance is to use pandoc to export your notes. Pandoc supports a wide variety of export formats including pdf, doc, and HTML.

There are usually two scenarios:

Make sure the path to the Dendron workspace matches your setup. Then, run update-desktop-database ~/.local/share/applications/ in a terminal or restart your system. You should now see Dendron in the launcher under the Utilities section, or if you search for Dendron in your launcher. Launching Dendron from here will launch VS Code with your Dendron workspace open.

Change the sorting order in the Outline Panel

Click the three little dots next to outline to change the sorting order. You can sort by Name (alphabetical) or Position (linear order) 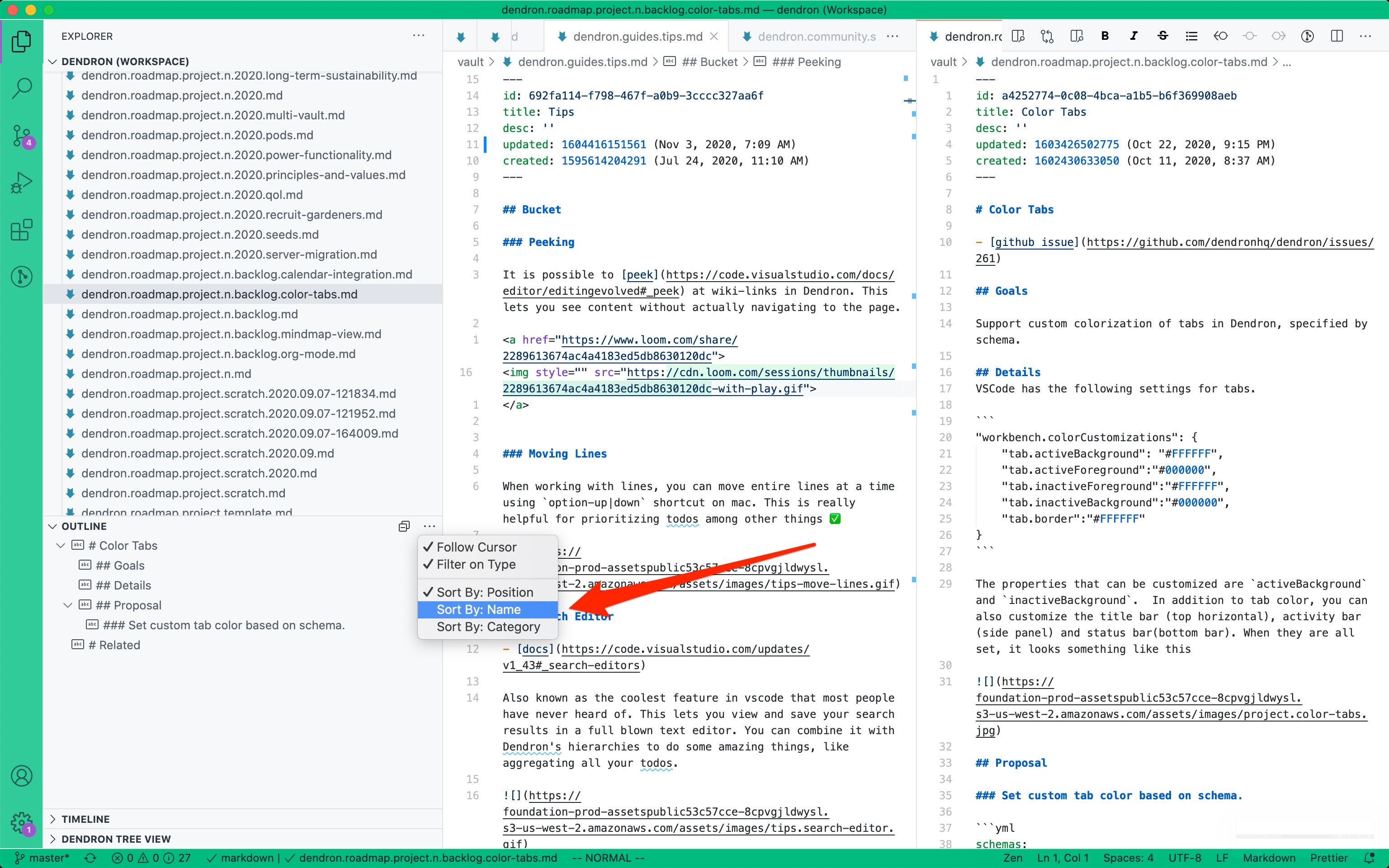 Drag and Drop files into Dendron 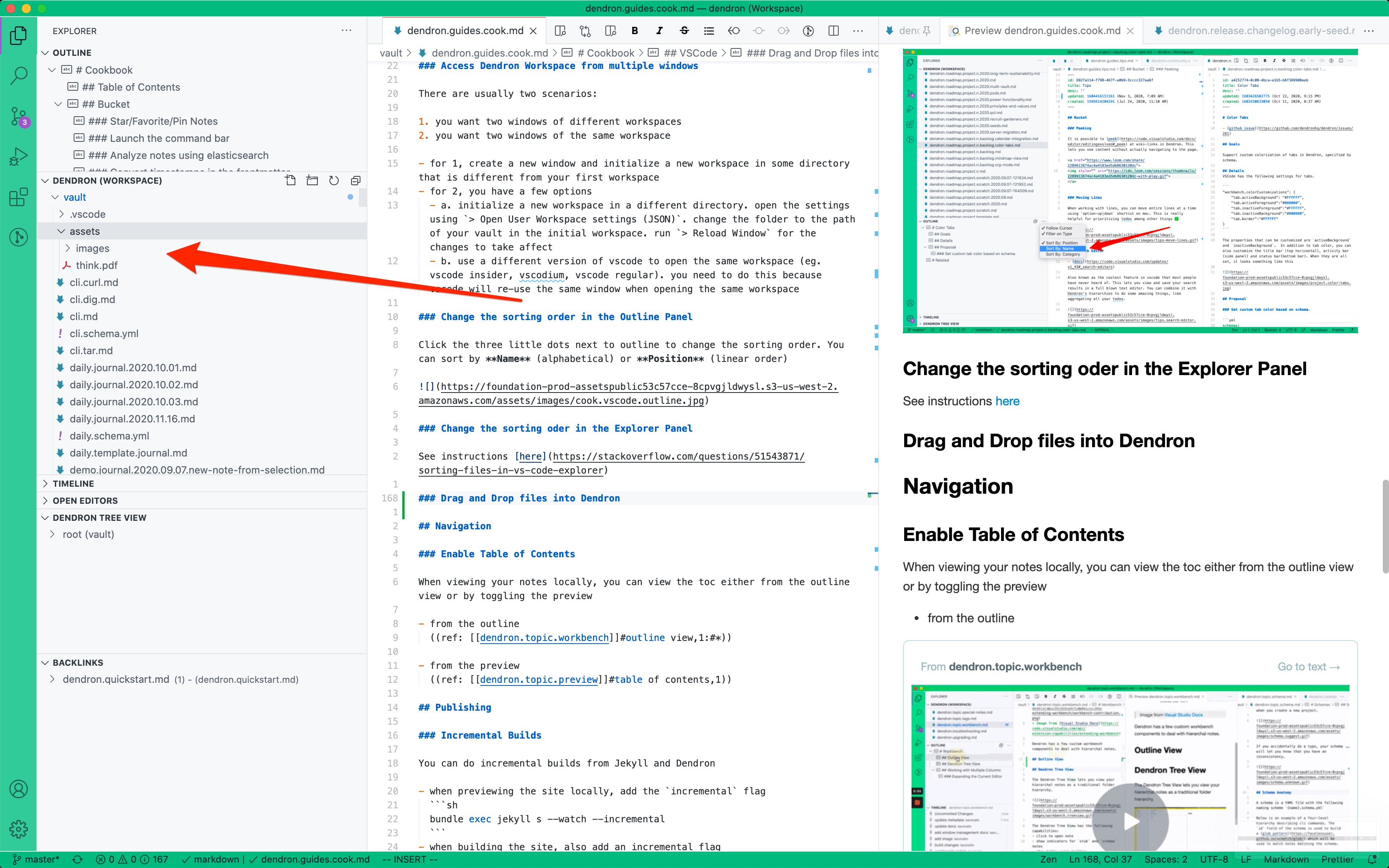 To drag files into Dendron, open the workspace pane on the side to drag and drop. We currently recommend you only do this for non-Markdown files that you want to link to inside your vaults.

Use Dendron with a current folder

The easiest current way to do this is to have multiple instances of VS Code open and toggle between the two. If you are very adventurous, you might even have multiple versions of VS Code for different contexts.

We are working on being able to run Dendron without the need for a workspace. You can track the progress of this on this issue

If you use VS Code, you can use the Markdown Kit extension. Unfortunately this is not available in VSCodium at this time.

One of our users published a great guide on this here

Use Dendron on a separate instance of VS Code

You can use Dendron on a separate instance of VS Code by launching it with the command line flags --user-data-dir and --extensions-dir:

Dendron doesn't currently provide native support for this. You can download the Bookmarks extension to achieve the functionality in the interim.

This video walkthrough walks you through that process.

You can download the repo used in this walkthrough from GitHub

Some potential use cases you can do using Elasticsearch and Dendron:

Convert timestamps in the frontmatter

Currently, Dendron notes show timestamps in epoch time which is not the most parsable for humans. You can use the timestamp converter extension order to see a human representation of said timestamp.

Use Dendron with Anki

You can use the markdownload-markdown-web extension to clip content as Markdown from Chrome.

To get familiar with regex syntax, try regexr is a great place to experiment with different queries.

Automatically Convert Casing on a Note

You can use the string converter extension to change [[normal note with spaces]] to [[normal-note-with-spaces]] as well as a series of other text transformations.

Backlinks
Basics
Launch the command palette
Manual Install
Checking Logs
Server Logs
Logs from previous session
Mobile Support
Vaults
Adding a Remote Vault to your Dendron Workspace
Converting a local vault to a remote vault
Create note in a specific vault
Renaming a Vault
Private Vaults
Publishing
How do I exclude certain vaults from being published?
Transferring
Export your notes as a PDF
Workspace
Access Dendron Workspace from multiple windows
Add Dendron to application launchers on Linux desktops
Change the sorting order in the Outline Panel
Drag and Drop files into Dendron
Find Installed Extensions
Use Dendron with a current folder
Using Multiple Workspaces
Updating a workspace
Other
How can I paste HTML content as Markdown?
Syncing Dendron between devices
Using git and GitHub
Use Dendron on a separate instance of VS Code
Star/Favorite/Pin Notes
Analyze notes using Elasticsearch
Convert timestamps in the frontmatter
Use Dendron with Anki
WebClipper
Regex
Automatically Convert Casing on a Note