You can get a better idea of what went wrong by checking out the logs. At that point, you should be able to narrow down the root cause to one of the issues below. If not, please bring it up on the discord or file a bug report

Lookup Shortcut is not working

This is an issue with upgrading to 0.47.0. If you are encountering this, you'll want to copy the following into dendron.yml

Markdown Notes, Markdown Preview Enhanced, and Markdown All in One are known to interfere with Dendron

The VSCode default markdown preview has the same icon as Dendron's Markdown Preview. It is currently not possible to disable the builtin preview (we are looking into fixing this here).

Meanwhile, you can open Dendron's markdown preview by clicking the preview button on the left of the menu bar or by using the > Markdown Preview Enhanced: Open Preview to the Side command 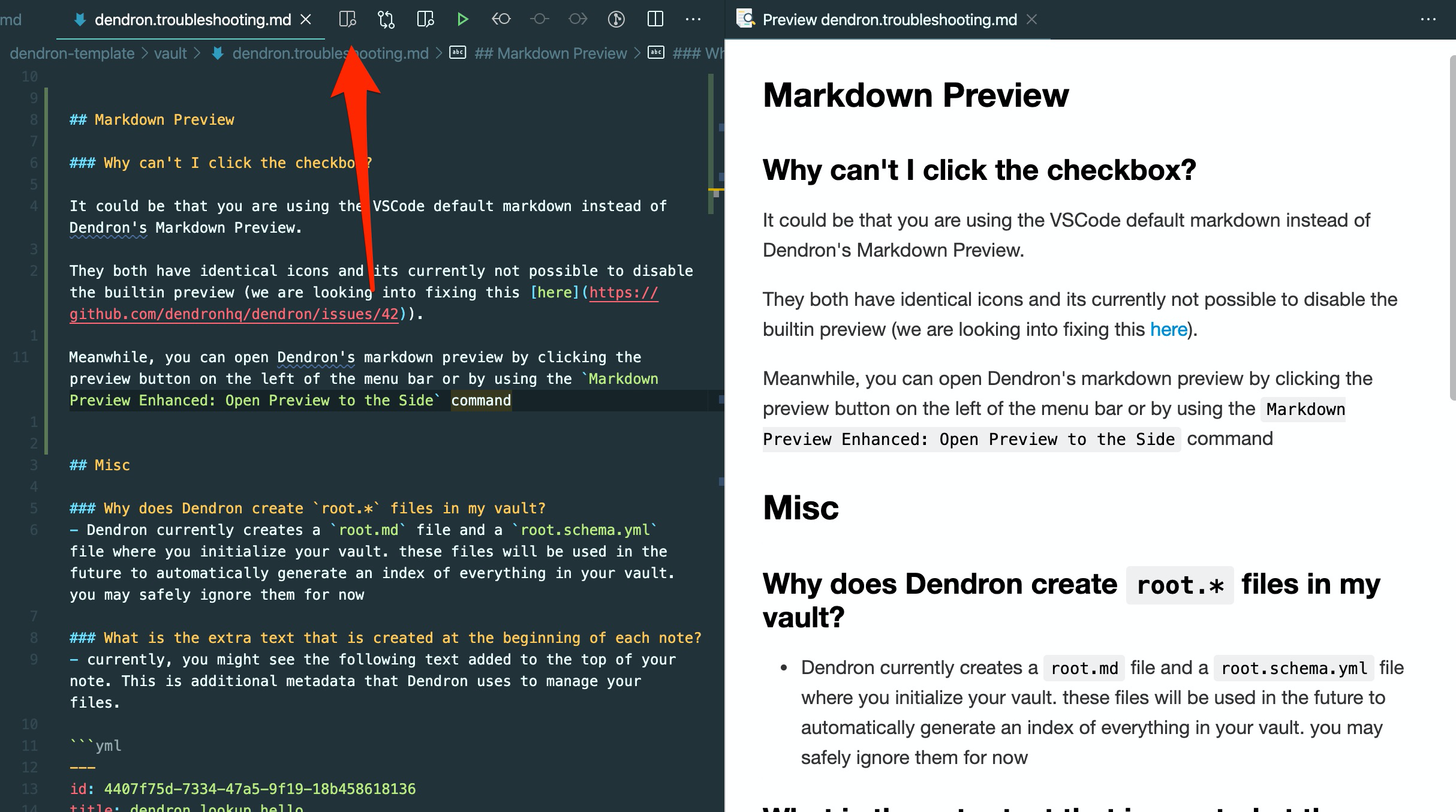 Sometimes Dendron views can get out of sync with notes. To fix, run Dendron: Reload Index to manually sync. If that doesn't work, you can also try Developer: Reload Window to restart VSCode.

Remove notes that extend from root

We currently don't support creating children of root.md This note is special. While the contents can be edited, creating a hierarchy off root is not officially supported

Run Dendron inside a Workspace

Dendron requires a VSCode workspace file to operate. Make sure to open the dendron.code-workspace file by following the instructions here

Dendron starts a local server in the background and the plugin connects to it to index notes. Check that you don't have anything that is running or blocking localhost.

Dendron can sometimes fail to load due to a malformed note. Common issues:

Dendron will update keybindings/settings/etc to the latest defaults if not currently set on upgrade. If you see the above error, it means that Dendron had trouble parsing one of your settings files. This doesn't stop dendron from starting but it does mean that the latest settings aren't being applied.

The most likely culprit of this error is a bad snippets file. To fix, bring up the command prompt, type >Configure User Snippets, open dendron.code-snippets and see if there's anything funky with the json on the line mentioned by the error. You can also use tools like jsonlint to validate your JSON.

That means there's an issue with your yaml. You can paste it in yaml lint to check that you are using the correct yaml syntax.

Schema templates are defined as YAML objects. The most common mistake is putting them down as a list

For example, this is a valid schema.

This is not a valid schema.

It could be that you are using the VSCode default markdown instead of Dendron's Markdown Preview.

From dendron.guides.troubleshooting
Go to text →

Still initializing. Please close this window and try again after Dendron has been initialized.

When Dendron starts up, it initializes a local server which is responsible for indexing notes and fetching note metadata. Plugins like the preview depend on the server being initialized before activating. You'll know the server is initialized after you see a Dendron is activated notification.

Open the output view and use the dropdown menu to find the log titled DENDRON.

Reference to Another Note on Ubuntu

If Ctrl+Shift+R (reference to another note) doesn't work on Ubuntu, do sudo apt install xsel.

Dendron runs the preview on port 8080. Make sure you don't have something already running there.

Check if you have git installed. You can find more details here

This is likely due to other extensions that you have installed that provide conflicting definitions for wiki links.

The most likely culprits are foam or markdown-notes. Uninstalling them will fix this issue.

You can see your installed

Multiple Vaults with the same name

You will get this if you have multiple vaults that have the same name. This is an error with Dendron since Dendron requires all vault names be unique. You can fix this by removing the duplicate vaults or setting a unique name property for the vault.

If none of the troubleshooting methods work, you can ping kevin on Discord or submit a github issue.

When doing either of these things, please include the following information: