Below are some concepts that are helpful to know when using Dendron. Note that features with 🚧 are still under active development and might not be fully implemented.

From Markdown
Go to text →

Markdown is a lightweight markup used to edit text.

Frontmatter is a convenient way of adding extra information to your documents like a shorthand title or longer description (think any extra information you can use to describe a note). This type of information is generally called metadata and the structure used is called YAML. You can add it to the front of your Markdown file and it won't show up in the preview. It was first introduced by Jekyll.

You can read more about the frontmatter used in Dendron here

A workspace is a collection of one or more vaults. This is a folder that contains all the files necessary to manage your information in Dendron.

A vault is a collection of notes, files, and configuration files.

If you're familiar with git, it's just like a code repo. By default, Dendron creates a vaults folder when you first initialize a workspace. All your notes are stored on a per vault basis.

By default, when you look for notes in Dendron, it will search over all vaults.

From FAQ
Go to text →

Users of other note-taking tools often balk at Dendron's focus on hierarchies. The common counterpoint is that the real world is not constrained by hierarchy and that this approach isn’t flexible enough for what they want to do. These users argue for graphs and backlinks as a better primary model for managing knowledge.

A graph is indeed more flexible. If we were building a digital brain for computers to perfectly model the world, we would probably go with this approach. But we are not building a tool for computers to capture every facet of the world; we are building a tool to help humans make sense of it. The challenge we face as humans is information overload. There is too much of it and we need ways of constraining that complexity. Filtering large amounts of information into exponentially smaller subsets is what hierarchies are built for (and why they are used as the core primitive in every database ever created).

With a hierarchy, you have one source of truth where a note can be filed and a filtering process to help you find the right place to file. Note that this doesn't limit you to creating secondary associations using backlinks, tags, and keywords.

The traditional failings of past hierarchies were that they were too rigid. Most people’s experience with hierarchies are folder hierarchies that ossify from the moment that they are created. These hierarchies are hard to change and so people don’t change them, even as their underlying understanding of the domain changes. It is because of this friction that most new tools focus on note creation without any predefined structure. This approach makes creating notes easy but finding notes hard.

Dendron has flexible hierarchies. They provide a structure for your notes but these structures can be easily changed. In programming, developers can refactor code and change its structure — the IDE will make sure that all references pointing to the original code are updated. In Dendron, you can refactor notes and hierarchies and Dendron will make sure that your PKM is consistent throughout. This means that you have the best of both worlds: a basic structure for the organization but the flexibility to change it.

From Hierarchies
Go to text →

Dendron organizes your notes into hierarchies. These are . ("dot" or "period") delimited Markdown files.

Below is a hypothetical hierarchy for a file tree:

The same hierarchy in Dendron would look like the following:

You can read more about hierarchies here.

A domain is the root of a hierarchy. In the example below, project1 would be the domain.

From Templates
Go to text →

Templates are notes whose content can be copied to other notes.

Templates can either be applied into an open note with the Apply Template, or automatically applied at note creation with Schemas, or through Create New with Template option during lookup.

From Schemas
Go to text →

Schema help you apply consistent structure to all your notes.

As you end up creating more notes, it can be hard to manage them at scale. Think of schemas as an optional type system for your notes that describe the hierarchy of your data and are represented as a hierarchy, themselves.

One of the primary capabilities for schema is to automatically insert templates into new notes.

You can create a schema by adding a YAML file with the following naming scheme {name}.schema.yml to your workspace.

Below is an example of a three-level hierarchy describing cli commands. You don't need to concern yourself with the details of the schema syntax just yet, just know that this schema will match the following glob patterns: cli.*, cli.*.cmd, cli.*.cmd.*, cli.*.env

Stubs are notes that don't exist but that you might want to create. They will show up as suggestions in lookup results. There are two reasons why these suggested notes might show up:

Pods are the mechanisms Dendron uses to import and export notes. Dendron has a different pod depending on where you are getting and publishing your data to.

The command palette lets you access all command based functionality inside VS Code.

The lookup bar is how you interact with notes inside of Dendron. Use it to create, find, and delete notes. You can type > Dendron: Lookup in the Command Palette or use the Ctrl+L shortcut.

Glob patterns are a way of pattern matching characters. You can test and see more example of glob patterns here.

From Best Practices
Go to text →

Dendron will auto-generate a human friendly title based on the last part of your hierarchy. By default, Dendron uses title.sh to generate titles based on your note name. Titles generated are consistent with the Chicago Manual of Style. Dendron will replace - with a  (space) when generating titles.

If you end up adding custom capitalization to your file name, Dendron will not attempt to generate a title but return the last part of your hierarchy as is.

Early builds of Dendron. Only available to Environmentalist.

A pretty ref is a note ref rendered with an outline.

You can see an example below 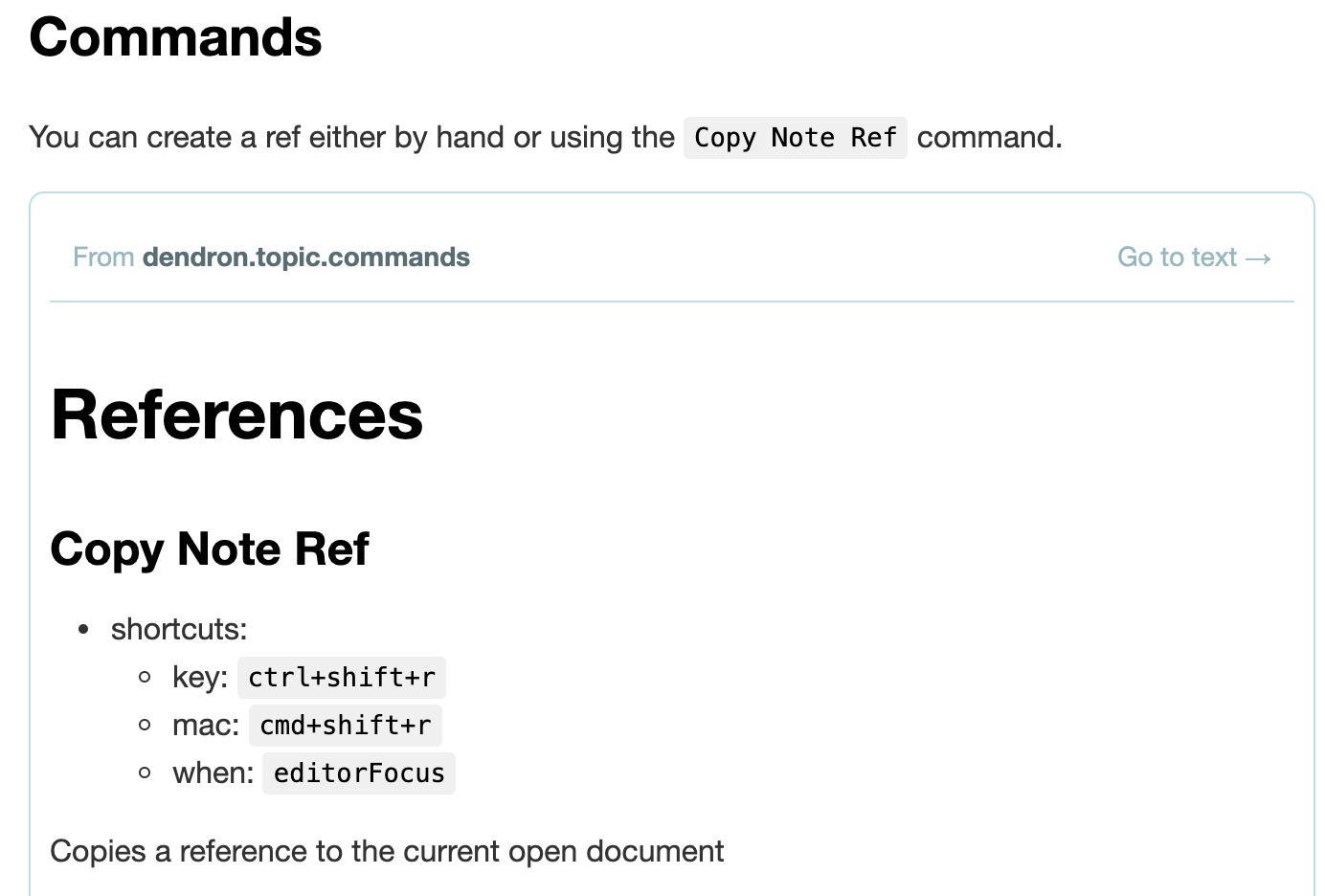 A regular note ref is embedded inline in the text.